Scroll down for an exclusive giveaway from Jodi Thomas! 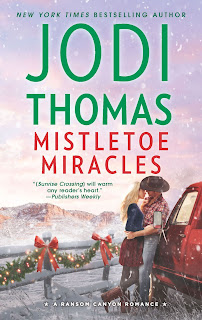 A small-town Texas Christmas story, where hearts are lost, love is found, and family always brings you back home.
Griffin Holloway is desperate: the Maverick Ranch has been in his family for generations, but lately, it’s a money pit. He’d sooner marry one of his horses than sell the ranch. Marriage, though, could be a solution. If he can woo a wealthy bride, he might save the ranch—just in time for Christmas. Jaxon O’Grady likes his solitude just fine, thank you very much. But when a car accident brings the unexpected to his door, he realizes just how much one person can need another. Crossroads is the perfect place for Jamie Johnson: avoiding nosy questions about why she’s single, she’s happy to keep to her lakeside home. So she’s baffled when she gets the strangest Christmas present of all, in the form of a Mr. Johnson, asleep on her sofa. Who is he, and why does everyone think he’s her husband? In this uplifting novel, three unlikely couples discover just what Crossroads, Texas, can offer: romance, belonging, and plenty of Christmas spirit.

Looking at his two brothers was like staring at one of those paintings with hidden figures masked in the folds of dots. There had to be depth in them, something that made sense, but damned if he could find it.

Griffin Holloway considered his own faults. Well, his one fault, really. That’s all he’d allowed himself in this lifetime. Some people might consider being born Texan a flaw, but he loved his state and this land that generations of Holloways had been born to.

He cussed, though. Far more than allowed, he fig­ured. His mother had washed out his mouth so many times when he was a kid that he’d grown to like the taste of Ivory soap.

But his two younger brothers were not nearly as dis­ciplined. If they had to carry all their shortcomings in a sack, they’d both be permanently bent over.

Holloway men might all top six feet and they were reasonably good-looking, but Griffin wasn’t sure any, including him, could claim to be long on brains.

Cooper, the youngest at twenty-three, was lanky and limber as a bungee cord. He thought the ranch was his private playground. Hell, he should’ve been born free like a coyote or a hawk. As a kid, he hadn’t bothered to wear clothes unless their mother made him when she was expecting company.

He was so wild, she swore if he’d been able to grow fur, she could have sold him to the circus. Griffin wasn’t sure, even today, that his little brother wasn’t more critter than human.

Growing up hadn’t changed him much.

Right now, Cooper was standing, covered in mud, in the headquarters’ great room, and it wasn’t even eight o’clock in the morning. He didn’t seem to be paying any attention to the weekly family business discussion, but that was nothing new. He obviously wanted to get the talking over with and head out to roam the land—fishing, hunting, exploring for Aztec gold—doing anything but work.

Elliot, the middle brother, tried to look like he was following Griffin’s weekly lecture about how broke the ranch would be by Christmas. At least Elliot did his share of the work and had since the day he’d come home from college to help run the place. But Elliot’s heart wasn’t in ranching, never had been. He spent ten hours on his computer for every one he spent on a horse. He made Griffin think of a bit actor who’d accidentally stumbled onto the wrong set.

Facing them both, Griffin cleared his throat and got straight to the point. “We have a problem with a simple solution. I’m thinking we’ve tried everything else and now it’s down to only one answer.”

They both looked clueless. Elliot started texting and Cooper scratched his brown hair, dry and dirty as a tumbleweed.

I’m adopted, Griffin thought. It’s the only explana­tion. Or they are. He’d been around when his mother went to the hospital to deliver them both, but he hadn’t actually seen the births. He’d been eight when Elliot was born and eleven for Cooper. He could have han­dled watching. After all, he’d seen his dad pull dozens of calves by then. Even helped with some.

How much different could it be? 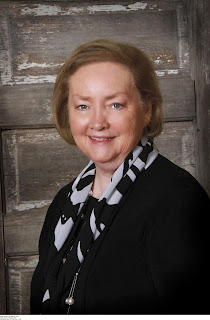 A fifth-generation Texan, New York Times and USA TODAY bestselling author Jodi Thomas chooses to set the majority of her novels in her home state, where her grandmother was born in a covered wagon. A former teacher, Thomas traces the beginning of her storytelling career to the days when her twin sisters were young and impressionable.
With a degree in family studies, Thomas is a marriage and family counselor by education, a background that enables her to write about family dynamics. Honored in 2002 as a Distinguished Alumni by Texas Tech University in Lubbock, Thomas enjoys interacting with students on the West Texas A&M University campus, where she currently serves as Writer in Residence.
Commenting on her contribution to the arts, Thomas said, “When I was teaching classes full-time, I thought I was making the world a better place. Now I think of a teacher or nurse or mother settling back and relaxing with one of my books. I want to take her away on an adventure that will entertain her. Maybe, in a small way, I’m still making the world a better place.”
When not working on a novel or inspiring students to pursue a writing career, Thomas enjoys traveling with her husband, renovating a historic home they bought in Amarillo and checking up on their two grown sons.

(No purchase necessary. Transportation is not included. Winner will have one year to select available dates. Limit of four people at the condo for selected dates. No exchanges.) 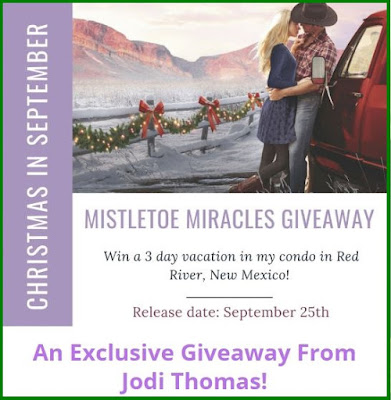