I first discovered author Frances Maynard in a Guardian article last Spring when I was researching the genre of books called "UpLit." I had noticed that my library customers were asking for this kind of story, which seemed to gain popularity after Eleanor Oliphant is Completely Fine was published. There is not a specific definition for UpLit; however in most of the books in this category the main characters struggle with complex issues, but ultimately seem to find redemption and hope in the end.

I noticed that Ms. Maynard's novel The 7 Rules of Elvira Carr was mentioned in the article, so I bought it, read it, and reviewed it here: https://kellywellread.blogspot.com/2019/03/a-little-about-uplit-genre-and-book.html. I was pleased to get to know Evvie Carr, who is quite a unique character. There are also more UpLit titles mentioned in the above book review, as well as a more thorough explanation of the genre.

When I read the summary of Maggsie McNaughton's Second Chance, the new novel by this author, I purchased it from Book Depository, as it was not available in the US. at the time. I did notice that it can be purchased on Amazon now, and I've included the link above.

Maggsie McNaughton is not your typical heroine of a novel. She's a 4' 10" uneducated, dyslexic ex-con with anger management issues, a drinking problem, and really bad teeth. But I fell in love with Maggsie, and rooted for her the entire time I was reading this book.

Marguerite McNaughton grew up in a very dysfunctional home, and due to her dyslexia had a difficult time in school - unsympathetic teachers and teasing by her classmates. She had two early tragedies in her life as a teenager, which let to acting out and going down a road of repeated incarcerations and lashing out at anyone who tried to make her feel "small" - and not due to her size alone.

As the book opens, Maggsie has just been released from another prison term. She is working at low-level job with a company known for giving ex-cons a second chance, and she's sharing a home with some other women who are also on probation. We experience some flashbacks into the life Maggsie led "inside," including the relationship she formed with one woman in particular who began teaching her to read.

Maggsie is tough and a hard worker, but she doesn't make friends easily, and often alienates those who try to get close to her. One of the most enjoyable aspects of the book is the wonderful cast of characters that surround Maggsie as she comes to experience the titular "second chance." Maggsie grows and learns, makes mistake, and changes little by little into the person that ultimately she can be proud of.

This book reminded me how important literacy is, and as a librarian I am privileged to be part of a profession that advocates and provides resources for those learning to read, no matter what the age. The reality of what living life in this world is like for those who cannot read is readily on display in this novel, and I was impressed to learn that the author teaches English to adults with learning disabilities, including dyslexia.

There are quite a few British slang words used in this novel that I needed to look up, like "ruddy" and "poxy" and something about soldiers! But once I got used to it, I could hear Maggsie's voice so distinctly in the narrative. One part at the end of the book required a bit of suspension of belief; but I was so invested in the lives of the characters and the outcome by that point that I really didn't mind at all.

I'm so glad I got to know Maggsie. You will want to meet her, too.

Posted by Kelly Moore at 2:49 PM No comments:

The Dog on the Acropolis by Mark Tedesco 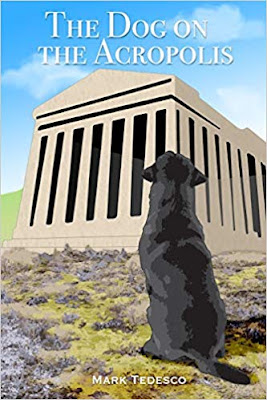 Indie author Mark Tedesco has taken a interesting true-to-life situation - the stray dogs in Athens, Greece - and turned it into a dual-timeline fictional novel set in ancient and present-day Greece that explores the lives of two families and communities and the dogs that bind them together.

I didn't know about these stray dogs until I saw an article on Twitter about them, then went on the hunt to research them further. Apparently, due to the financial crisis in Greece, many people could not afford to care for their pets; but the communities and the government have stepped in to care for them. You can read  more about the issue here: https://www.lifewithdogs.tv/2013/06/greeces-stray-dogs-loved-and-cared-for-by-many/

In present day Athens, a dog named Draco, who begins as a narrator of the story, sees as his job and work to lead tourists up the steps to the Parthenon. He is fed, watered, and bathed by the shop owners of the "plaka," and in this part of the book he becomes very attached to a baker named Akil, his wife, Maria, and their son, Jason, who are experiencing some dysfunction as a family. Through this family's interactions with Draco, the entire community is changed.

But when Draco sleeps at the top of the steps each night, he dreams of Daria, his first canine ancestor on the Acropolis, and through those dreams we come to know stone cutter Adelino, his wife, Diana, and their son, Tiro, whose lives revolve around the building of the Parthenon and the statue of Athena designed by architect, Pheidias.

The author does a great job of giving voices to the various characters in the book, both canine and human. I enjoyed getting to know them all and learning more about a culture and time different from my own.

Draco and Daria have many adventures through their stories, and the author reveals themes of community, family, faith, and loss - and what a gift a single life, be it human or canine, can be.

If you love dogs and books that explore other locales, cultures, and times in history, you would probably enjoy The Dog on the Acropolis.