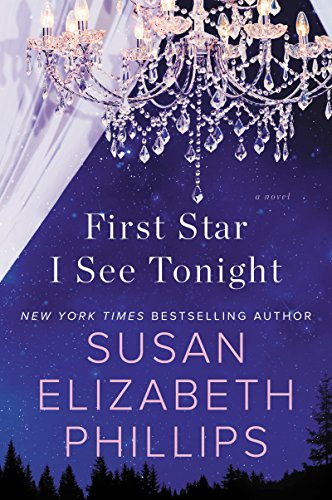 Welcome back, Susan Elizabeth Phillips, a consistently enjoyable romance author who has provided many hours of escapist reading for her legion of fans!  She took a slight detour in her last novel, Heroes are my Weakness (puppets?) and now returns to the Chicago skyline and the fictional Chicago Stars NFL football empire in her new novel, First Star I See Tonight, to be published August 23rd.

Cooper Graham is a retired Stars quarterback, who went out on a professional high by winning the Super Bowl for the team.  He now owns a celebrity nightclub where he is the main draw.  Piper Dove is a struggling private investigator in debt from purchasing her father’s PI Agency from her step-mother, since her deceased father never allowed her to work with him.  But she is feisty and determined.  She gets caught following Cooper for someone vetting his company as an investment opportunity and loses her only client.  An irritated and angry Cooper blackmails her into doing some investigative work for him, and…..sparks fly!

Piper is anything but a girly-girl, wholly unlike the models and actresses Cooper usually dates. She’s tough, argumentative, and in some ways, more masculine than he is; but there is something about her…..Piper thinks Coop’s ego is the size of the Star’s football stadium, although his physical presence is the stuff of daydreams.  Shakespeare’s statement that  “the course of true love never did run smooth” is quite apt in describing this delightful novel, full of snappy dialog, a cast of quirky supporting characters, including some favorites from previous Stars novels, and a HEA that Cooper and Piper struggle to reach.  Though this novel can be read on its own, I highly recommend all of the Chicago Stars books, starting with It Had to be You.  Looking for beach reads?  This series is perfect for you, then!