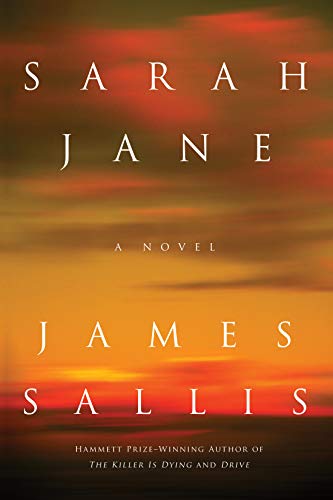 I read another librarian's review of this short novel and was intrigued, especially when I learned it was around 200 pages and I knew I could finish it without too much effort. What started as a "let's see what it's all about," led to a deep dive into an incisive and profound character study the likes of which I rarely encounter.

Sarah Jane is a mysterious character, and the reader knows they are in for some surprises when she says, "...I didn't do all those things they say I did. Well, not all of them anyway." Sarah Jane grew up with her father and a mother who kept disappearing; so it's not too much of a surprise that she has trouble staying in one place herself for long. She floats around in her youth, gets in some trouble, and ends up in the military rather than jail, those being the only options granted her at the time.

After her military tour, Sarah Jane supports herself as a cook, and ends up a bit on the run later in life after realizing someone she's married to is not who she thought he was. She changes locations and names like changing clothes, just keeps moving forward, almost instinctively. Ultimately, she finds herself working in law enforcement and filling in for a sheriff in a small town when he goes missing. This is where the mystery story begins. Because it IS classified as a mystery, and there are mysteries that do get solved. Some more definitively than others.

What surprised me, kept me intrigued, and also challenged me so much about this novel was the author's construction of his chapters. He starts a paragraph almost in the middle of the story, and the reader doesn't really understand what's happening right away. But, by sticking with it, we gradually fall into the narrative: the characters and action and clues - it all starts to make sense. Well, most of it, anyway. There is plenty of ambiguity here, but it works in this story. The novel also is not straight forward chronologically, but slips back and forth in time in a way that can be a bit jarring, but it all comes together eventually. Well, most of it anyway :/

It's really incredible what the author has done here in a little more than 200 pages. We are given a snapshot of various stages of the main character's life: click, Sarah's a child keeping a journal and scratching her arm open because she heard the phrase, "beauty is only skin deep," and went looking; click, Sarah is in a far away country in an unnamed war, lying in hot sand after an explosion, having killed an enemy so young, she has to imagine something different to live with it. And she does; click. And on the story goes, through interactions, connections, incomplete beginnings and leavings. We get a glimpse of some of the things Sarah did do, and wonder what she did not.

The writing is really something, and I found myself taking screenshots of sentences and paragraphs I wanted to re-read. Since I had checked this book out from the library, I couldn't write in it or turn down pages. But I wanted to. And will buy my own copy to re-read someday. Because it deserves to be read more than once.

I saw on Amazon some one star reviews, and a five star review that said, "people who slam this book just didn't get it." Reading is subjective, of course, but I think I understand what the author was attempting to accomplish: an unusual character study in which we learn many things about the main character, but in such a removed way, that we barely get a chance to know her before it's over. And she's worth knowing. There are glimpses of violence, but also touches of redemption that provide the payoff I needed to be satisfied as a reader.

I don't think this book is probably for everyone. The narrative is bit chaotic, and the confusing way the chapters begin could be off-putting. But it worked for me. I tend to be drawn to books with unusual structure for some reason - maybe I just like the challenge. But this book reminded me why I love reading, fiction especially. Other books that I ended up loving due to an interesting narrative structure were Goodbye, Vitamin by Rachel Khong, The Current by Tim Johnston, A Key to Treehouse Living by Elliot Reed, and Costalegre by Courtney Maum.

The critical reviews of the book, from sources such as The Wall Street Journal, The Toronto Star, Bookpage, Library Journal, Publisher's Weekly, and Booklist, among others, are incredibly good. And I don't always agree with critical reviews. This time around, I concur. And I'm just sitting here, right now, imagining whom I will recommend it to next at the library.

Happy Thanksgiving to all who celebrate. I hope you enjoy some down time, and perhaps a good book. Like this one.⭐⭐⭐⭐⭐
Posted by Kelly Moore at 11:50 PM